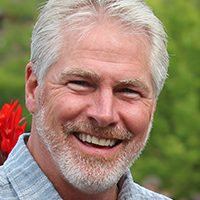 SYRACUSE, NY, August 25, 2021 — Friends of the Rosamond Gifford Zoo will hold its first Fall Conservation Ball on Friday, September 10, 2021. The event, featuring a roast and toast of Zoo Director Ted Fox for his 30-year anniversary at the zoo, replaces the former Snow Leopard Soirée fundraising gala traditionally held in February.

Friends of the Zoo opted to throw an outdoor, warmer weather, less formal event whose courtyard location allows more guests to attend the fundraiser, which will benefit animal care at the zoo and conservation in the wild.

“We’re calling it the Fall Conservation Ball, but it’s really an opportunity to embrace the fall outdoors and to celebrate the zoo and its conservation missions,” said Friends of the Zoo Executive Director Carrie Large.

Special this year is a celebration of Zoo Director Ted Fox’s 30th year at the zoo, Large said. Fox interned in the zoo’s bird department while studying animal science at Cornell University and enjoyed it so much he decided to pursue a career in the zoo field. He graduated from Cornell in 1991 and was hired as a small mammals keeper at the zoo the same year.

Over the next three decades Fox went on to work in indoor and outdoor birds, herps and aquariums, then as bird collection manager, then zoo curator. In 2011 he was named Zoo Director, but his full title is Director of Natural Resources and Facilities at the Rosamond Gifford Zoo.

His accomplishments include development of the zoo's Humboldt penguin exhibit, Penguin Coast, which opened in 2005; the expansion and addition of a 50,000-gallon watering hole at the Helga Beck Asian Elephant Preserve and several green infrastructure projects throughout the zoo, such as a rain garden at Primate Park and porous pavement in the zoo courtyard and parking lots.

Most recently he has overseen design and construction of a new Animal Health Center that will be the second-largest zoological medical center in New York State when it opens this fall.

“Ted has become the face of the Rosamond Gifford Zoo, second only to our Asian elephant matriarch, Siri,” Large said. “He is an amazing leader and I’m sure a lot of people will want to come out to help us toast – and roast -- him on September 10.”

The Fall Conservation Ball will begin at 6 p.m. with cocktails, music, gourmet hors d’oeuvres and carving stations in the zoo Courtyard. The Ted Fox Celebrity Roast will run from 7 to 7:30 p.m. followed by a champagne toast and an exciting live auction to benefit the new Animal Health Center at the zoo.