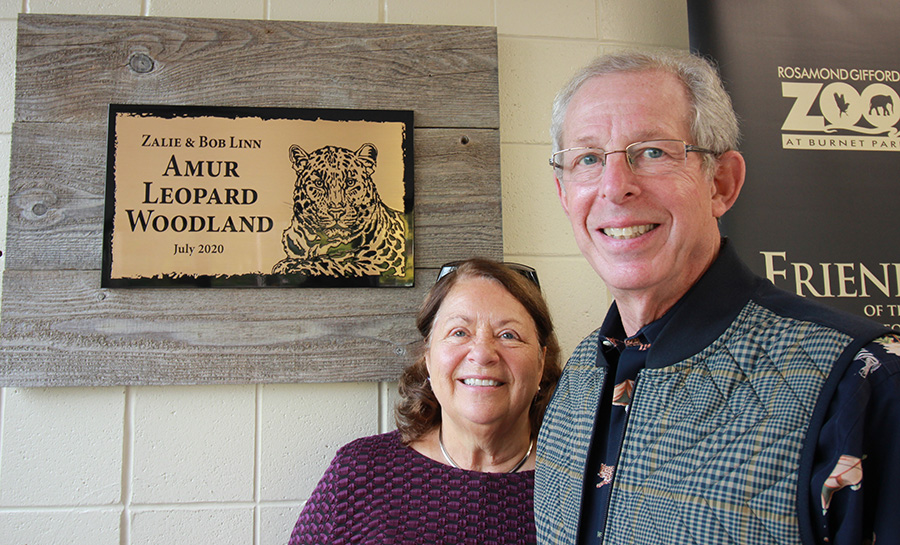 Onondaga County Executive Ryan McMahon joined Friends of the Zoo officials in recognizing Zalie and Bob Linn of Manlius for their generous naming gift to help create the new exhibit. The Friends of the Zoo presented the Linns with a smaller version of the nameplate gracing the exhibit.

The exhibit is now home to the zoo's breeding pair of Amur leopards, Tria and Rafferty, and their offspring. The pair produced twin cubs within a year of being introduced at the zoo. Their cubs, Milo, a male, and Mina, a female, were born in June 2019 and will be moving to other Association of Zoos & Aquariums institutions as part of the Species Survival Plan to save Amur leopards from extinction.

Amur leopards are critically endangered, with fewer than 60 estimated to remain in the wild. Accredited zoos care for an assurance population of about 200 through the Species Survival Plan.

The new wooded habitat features a high mesh ceiling, log bridges and tunnels and platforms 20 feet off the ground to encourage this species' natural penchant for climbing, said Zoo Director Ted Fox. The exhibit's height gives the cats "the best view in Syracuse," he said. Amur leopards also are a cold weather species, so they fit in perfectly with our Central New York winters and will be able to use the outdoor habitat year-round.

The Friends of the Zoo raised and allocated over $250,000 for the project, with the Linns contributing a large naming gift. Friends of the Zoo Interim Executive Director Quentin Skip" Lockwood called the Linns "the backbone of support for this new exhibit." He also acknowledged other key donors: the Herbert and Eleanor L. Howard Charitable Foundation, Triad Foundation, The Gifford Foundation and Laura and Rick Iorio.

The Rosamond Gifford Zoo Chapter of the American Association of Zoo Keepers (AAZK), contributed a training wall, a special section where visitors will be able to see animal care staff working with the leopards up close. Zookeepers have daily training sessions with animals to engage them in participating in their own care and husbandry.

County Executive McMahon said the exhibit opening "is another significant milestone for our world-class zoo."

"The fact that we continue to be entrusted with the care of these beautiful animals is a testament to our staff, the commitment of zoo management and our Friends of the Zoo group that supports us so much," McMahon said.

"This is probably the best public-private partnership we can point to in county government."

"Zalie and Bob, thank you for your generosity, and to everyone to has put their hard-earned dollars to work to benefit the entire community."

Zalie and Bob Linn said they consider the zoo an important part of the fabric of their community. "Central New York is our adopted community and we've had a wonderful life here," Zalie said. "We wanted to give back to our community and we're so glad we were able to do this, because we do love animals. I also hope that with this worldwide pandemic, it will give people time to reflect and preserve what we have had in the past, not only in Central New York but around the world."