The blue death-feigning beetle is a small species of darkling beetle found mostly in the Southwestern United States.

Darkling Beetles are a family of nocturnal insects. This family (Tenebrionidae) Contains about 20,000 small dark beetles, though some do have brightly colored markings.

This species is a desert dweller that is common in the Southwestern U.S., especially Arizona's Sonoran Desert.

●     The blue death-feigning beetle gets its bluish tint from a wax that it secretes to protect itself against overheating and dehydration.

●     This beetle gets its name from its defense mechanism, playing dead! When they feel threatened they roll over onto their back and play dead. Their main predator, spiders, prefer live prey instead of dead husks. 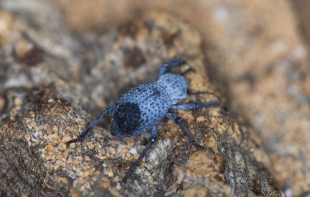